The method is based on the WordPress Roles and Capabilities functionality. Each user on your site has a specific role. Typical Roles used by WordPress are subscriber, contributor, author, editor and administrator (and Superadmin for multisite). Each of these roles has access to a set of capabilities (“stuff they can do”) and it inherits the capabilities of lower roles. So given that editor is a “higher” role than author, a user with editor role has at least the same capabilities as an author (via inheritance), and then some more. You can find the default role -> capability settings in a handy table in the WordPress codex.

By default, all plugins require the “switch_themes” capability. As you can see in the above mentioned table, only “administrator” roles have that capability on both single-site and multisite WordPress installs.

How to Override the Default Setting

Rather than developing a new access management system, we’ve chosen to add a simple WordPress filter to the capability required to run and manage a plugin. That means that you can override the default by adding a filter to your (child themes) functions.php file. Here is an example of such a function.

The above code uses a function to change the default “switch_themes” capability (for administrators only) to “publish_posts”. Via the table, we can see that the “author” role has access to that capability. 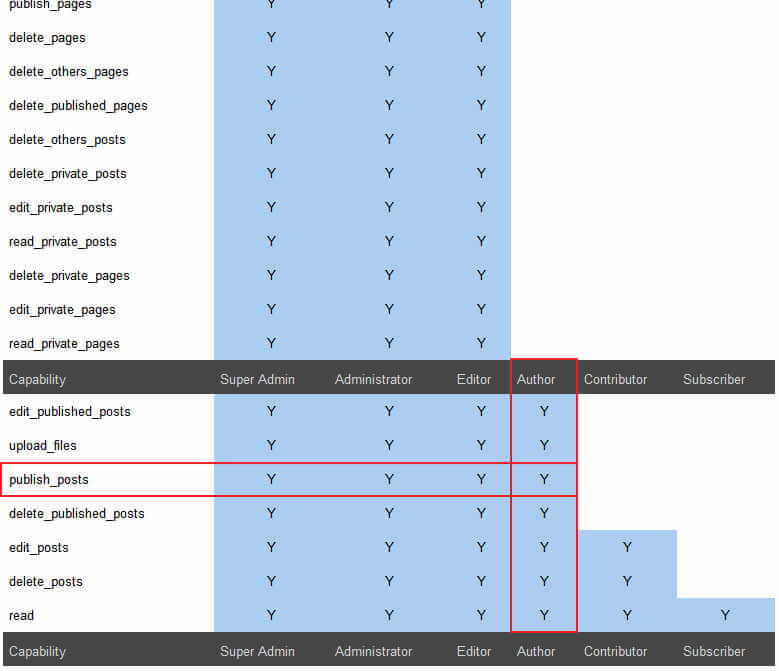 So any user with such a role (and any role “higher up” in the hierarchy such as “Editor”, “Administrator” and “SuperAdmin”) can now manage all the Billboard plugin functions.

The filter name (in this case “billboard_capability”) is pre-defined, as you can see in the next paragraph. You can not use other filternames. The functions though can be named anything, so you can change billboard_custom_capability to any other valid function name. Just make sure that a function is only defined once.

What About the Other Plugins?

Due to design and code considerations (and restrictions) the filter method can not (and will not) be applied to all plugins. The following plugins already have access management built-in via an option in the plugin settings:

Furthermore, BackupBuddy, Exchange, iThemes Security and Sync are not considered for this functionality.

Other plugins not mentioned here are on the to-do list. Keep an eye on future updates to these plugins, and check the change-log.

A Note for DisplayBuddy Plugins

Should you desire to set different access levels to various DisplayBuddy plugins on one site, an additional parameter is required, to make sure that all role levels are processed properly.

Given the following scenario:

We would then add the following code:

Note the number at the end of the filter, this indicates the “priority”. It is crucial to add the “priority” parameter, to make sure that the (shared) DisplayBuddy “getting started” page is visible to all roles. Without the priority parameter, the last filter would override the previous one(s).

The golden rule here is to add the highest priority (which is the lowest number) to the lowest role that we want to override.

We hope that with this new function, we can meet most, if not all of the requests for more granular access management of our plugins. Let us know what you think, in the comments section below. Additionally, if you run into any issues, you can find support here.