In the early days of blogging, the ability to comment set the technology apart. In those days the web wasn’t very interactive. Blog comments were media’s first step to becoming social media. A blogger would share their thoughts in a post, but then anyone in the world could respond in the comments. It created a dialogue that truly gave voice to the people, and introduced a measure of accountability that had long been absent in mass media.

But are blog comments still as important today?

The wider world quickly picked up on the power of comments and added a comment field to every bit of content. Now newspapers and YouTube are infamous for regularly featuring the depths of human depravity in their comments. 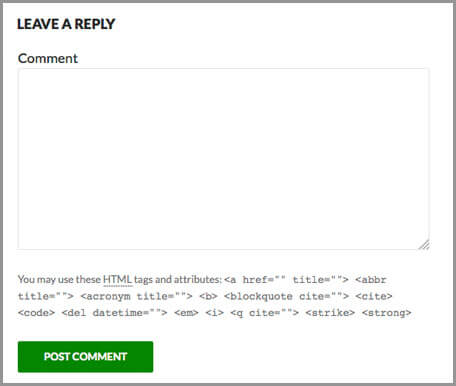 Does Your Blog Need Comments?

Comments have been an assumed part of blogging since the beginning. That inherent nature of comments means that shutting them off is a bold step.

And so people have been debating since the beginning whether or not blog comments are required. The debate has existed for years, but it’s flared up again lately.

The No Blog Comments Camp

Recently marketing guru Chris Brogan turned off blog comments. He complained that comments are inundated with spam and self-promotion, but also pointed out that commenting is happening everywhere:

“Comments have scattered to the winds.”

“Many people’s comments have become blog posts or social network posts in their own right.”

Copyblogger likewise shut down comments earlier this year, pointing to social media and other blog posts as a better venue for conversation. They also emphasize the value of creating your own content:

“I want to challenge you to take that great thinking and writing and use it to build your audience rather than ours.”

Back in 2006 Seth Godin defended his lack of blog comments: They’re a distraction. He felt they were too time consuming and ultimately would change how he wrote. Godin later justified turning off comments by saying:

In 2010 John Gruber explained his decision not to have comments on Daring Fireball by emphasizing his desire to avoid extra noise:

“My goal is for not a single wasted word to appear anywhere on any page of the site.”

And if you want even more anti-comments opinion, Matt Gemmell offered his reasons for shutting them off, then offered a follow-up a month later and then created a collection of comments commentary. Whew.

But let’s not pretend everybody is anti-comment.

“Long-term, I think that comments are the most crucial interaction point for blogs, and an area that deserves a lot of investment and innovation. Comments really haven’t changed in a decade, and it’s time to spice things up a little.”

Then again, blog comments haven’t changed much in the six years since Mullenweg made that comment.

“My favorite thing about blogging is the comments or even people responding on Facebook or Twitter. The interaction sometimes corrects me if I’m wrong and it’s a nice way to connect with people I wouldn’t otherwise meet.”

Chris Lema weighed in with a simple explanation based on a visit to Amazon:

“I found that the comments were more useful and valuable to me than the page content itself.”

And if you haven’t noticed, we’ve still got blog comments here at iThemes. Our theme for 2014 is “Go Far Together,” and for us comments are an important part of ‘together.’

So now what? You can side with Chris Brogan and Seth Godin and go no comments. Or join Matt Mullenweg and Chris Lema and keep the comments coming. But really, it’s your site. You need to make your own decision.

Here are some simple blog comment pros and cons:

Blog Comments Are Your Choice

You can turn the comments off. As Chris Brogan says, “We will all be OK.” Or keep them going. It’s up to you.

And really that’s how you should decide. What fits for your site? If you’re all about community engagement and interaction, blog comments are probably a no-brainer. But if you’re a slick, straight-to-business site, you probably don’t have time for the distraction of comments.

Is it important to build community and engagement on your site? Can you handle the unruly trolls, the spam, the transparency? Or would another medium be a better fit for interaction? These are the questions you need to answer when you’re considering comments for your blog.