Ready to Go Freelance? 34% of the Workforce is Freelancing

The world is shifting. Once upon a time our parents or grandparents landed a job and expected to stay there. Forever. Those days are gone. Not only do people switch jobs like a game of hot potato, but more and more people have gone freelance.

A new study shows that 53 million Americans are now doing freelance work. OK, that’s a big number. So what?

1 in 3 working people are freelancers.

This is a big shift in the economy. Some see it as a good thing:

“A more nimble economy is potentially more innovative, more competitive, and better able to deal with the fluctuations of global markets.” (Freelancing in America)

Some see it as something to worry about:

Independent workers “don’t have the workforce protections that have developed over the last 80 years. They are simply on their own,” said Robert Reich, the Secretary of Labor under President Bill Clinton and now a professor at the University of California, Berkeley. (Wall Street Journal)

And some see it as more than a big change. They’re describing it as the greatest thing since sliced bread:

“But this is more than an economic change. It’s a cultural and social shift on par with the Industrial Revolution. Just as the move from an agrarian to an industrial society had dramatic effects on social structures around civil rights, workforce participation, and even democracy itself, so too will this shift to a more independent workforce have major impacts on how Americans conceive of and organize their lives, their communities, and their economic power.” (emphasis mine, Freelancing in America)

It used to be that tracking how many people were freelancing was a simple matter—they’re either freelancing or they’re not. But these days it’s a lot more complicated. Only 40% of freelancers are what we traditionally think of as freelancers. There’s a huge group—27%—that still has a regular job and is just moonlighting. Then there are folks cobbling together an income from multiple jobs, the temporary workers and the small business owners who function like freelancers. 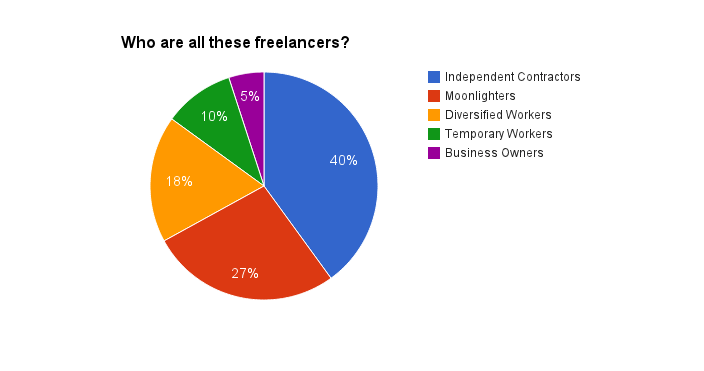 The workforce in general—and freelancing specifically—has changed a lot since our parents’ day. The idea of diversified workers—stitching together an income (and probably health insurance) from several sources—is new. It’s not quite the traditional job market of the past.

So Why Go Freelance?

If this is all new and different, why do it? Here are the top reasons freelancers give.

Sounds like money, flexibility and control are the big reasons.

And it’s paying off with happy freelancers.

While a changing economy and technology and all that other stuff get all the attention in this shifting transition to freelance, what really matters is how people feel about their work.

We spend nearly half our waking lives at work. You might as well enjoy it. And freelancers do (according to the Field Nation infographic):

But the numbers don’t end there.

It’s estimated those disengaged employees cost the U.S. $450-550 billion a year. These crabby employees are a bad influence, they skip work, drive away customers and steal on the job (Office Space anyone?).

Noticing the trends? Freelancers tend to be happier, more productive and more dedicated. They find purpose and meaning in their work, and in the end everybody wins.

Not All Employees Hate Their Work

Now let’s be realistic. Not every traditional, full-time employee hates their job and steals office supplies. There’s a lot of negative data in these reports, but let’s take it with a grain of salt. Some people love their jobs.

We’ve got a lot of happy employees here at iThemes. And we’re not the only company out there with satisfied workers doing cool stuff.

Not everyone is jumping the sinking ship of full-time corporate employment. But it is becoming more common. That’s why in addition to our happy full-time employees, we also work with freelancers (like me, the freelance writer).

So after looking at all of these freelance trends, the real question is whether or not freelancing is for you.

There’s definitely a growing contingent of freelancers—one-third of the American workforce is a big deal.

Oh, and that crowd of freelancers will just get bigger: By 2020, freelancers are expected to make up 50% of the full time workforce.

And there is a mountain of research showing that freelancers are happier. So if you’re not loving your job, if you’re not happy with what you’re doing and where you’re at, maybe it’s time to start thinking about going freelance.

We’re starting an on-going series looking at how to make the jump to freelancing. We’ll cover all kinds of freelance topics and offer as much advice and insight as we can.

One place to start is our free ebook, So You Want to Be a Freelancer?: A Guide for Creating and Growing Your Own Web Design Business.