Today, I want to review GenerateBlocks, a plugin that is still in Alpha. GenerateBlocks has the idea of creating powerful WordPress blocks, without all the bloat. What that means is that it’s a small collection of lightweight WordPress blocks that can be used to accomplish nearly anything.

GenerateBlocks is created by the folks that own and run a GeneratePress.com. GeneratePress is a free and premium WordPress theme developed by Tom Usborne. What I love most about this team is that it’s designed and developed with speed and performance in mind. Depending on the site (and client) I have found myself torn between using GeneratePress and WP Astra. Both seen feature speed and performance enhancements throughout their codebase while still allowing the freedom to create any type of design you want.

Let’s Look at the Blocks

The main idea behind GenerateBlocks is that there are four simple blocks that you need to create any type of layout you want, from the simplest of layouts to the most complex. The four blocks are container, grid, headline, and buttons.

The way that GeneratePress works is that everything starts out inside of a container. The container is really the way that you begin to organize your content into rows and sections. It essentially is the backbone of all the blocks that GenerateBlocks offers, and it gives you full control over the look of your website.

The next block to take a look at is the Grid block.  Once you have added a container, you then want to place a Grid block inside of your container and really design or set up how many rows you want to have. Now the interesting piece about the Grid block is that it sets a new standard for a great creation. With the Grid block, you have complete control over such settings as grid alignment the flow and even the responsiveness.

To see all of this an action, I created a video review for you. This video review is a bit different. At the time of this writing and the time of this video, GenerateBlocks is still in alpha, so we will likely see changes to GenerateBlocks and the way it works. I started out this video using the default TwentyTwenty WordPress theme, which I’ve used for all of the reviews thus far.

However, one thing you’ll know is that after a while, it didn’t make sense to use it in the TwentyTwenty theme because of it being in an alpha state and because it really works so well with GeneratePress. So I switched to using GeneratePress for the last 20 minutes or so of the video. As always, I hope you enjoy these videos and can give you a walkthrough to help get you thinking about how you might use the new WordPress block editor with your site.

Key Features in Using this Plugin

GenerateBlocks has an interesting take on how many blocks you should have. Instead of building a collection of 20 or 30 blocks, the vision of GenerateBlocks is to create blocks that you need and use the reusable blocks feature built into the WordPress block editor. That means you won’t find hero blocks, CTA blocks, or even Pricing blocks. Instead, you create these blocks yourself, save them as reusable blocks, and then when you’re creating a new page, you begin to add that block to the new page and convert that reusable block to a regular block and then make changes to it.

In my testing, I found that this is actually faster for me, especially when I’m trying to control all of the design aspects of a site. I don’t need to worry about installing several different block collection plugins to build out a site using the new WordPress block editor. And best of all is that GenerateBlocks works with GeneratePress, which is my go-to theme these days, especially when using the WordPress blog editor.

What Type of Blocks are Included?

As I mentioned previously there are four blocks that come with GenerateBlocks.

The price of GenerateBlocks is free. It makes it an affordable solution for you to start playing with and seeing all that you can do within the WordPress block editor. You’ll want GeneratePress Premium, so you are looking at spending around $50 for the theme.

Who Should Use this Plugin?

At this time, I’m not ready to recommend GenerateBlocks to the masses. That said, if you’re a developer or you know your way around some simple CSS, you might want to take a look at GenerateBlocks and see if it’s something that would work for you. I think that as we see GenerateBlocks mature into a fully released version in the next month or two. We’ll see many of the features enhanced and added too.

The biggest missing feature to me in GenerateBlocks is that it doesn’t have a post block. What I mean by that is that a post block is needed in many instances where you want to bring in your blog post to a landing page. I would love to be in an environment that creates a seamless integration between the theme and the WordPress block editor, and with GenerateBlocks and GeneratePress, we are getting close. I definitely recommend checking them out. 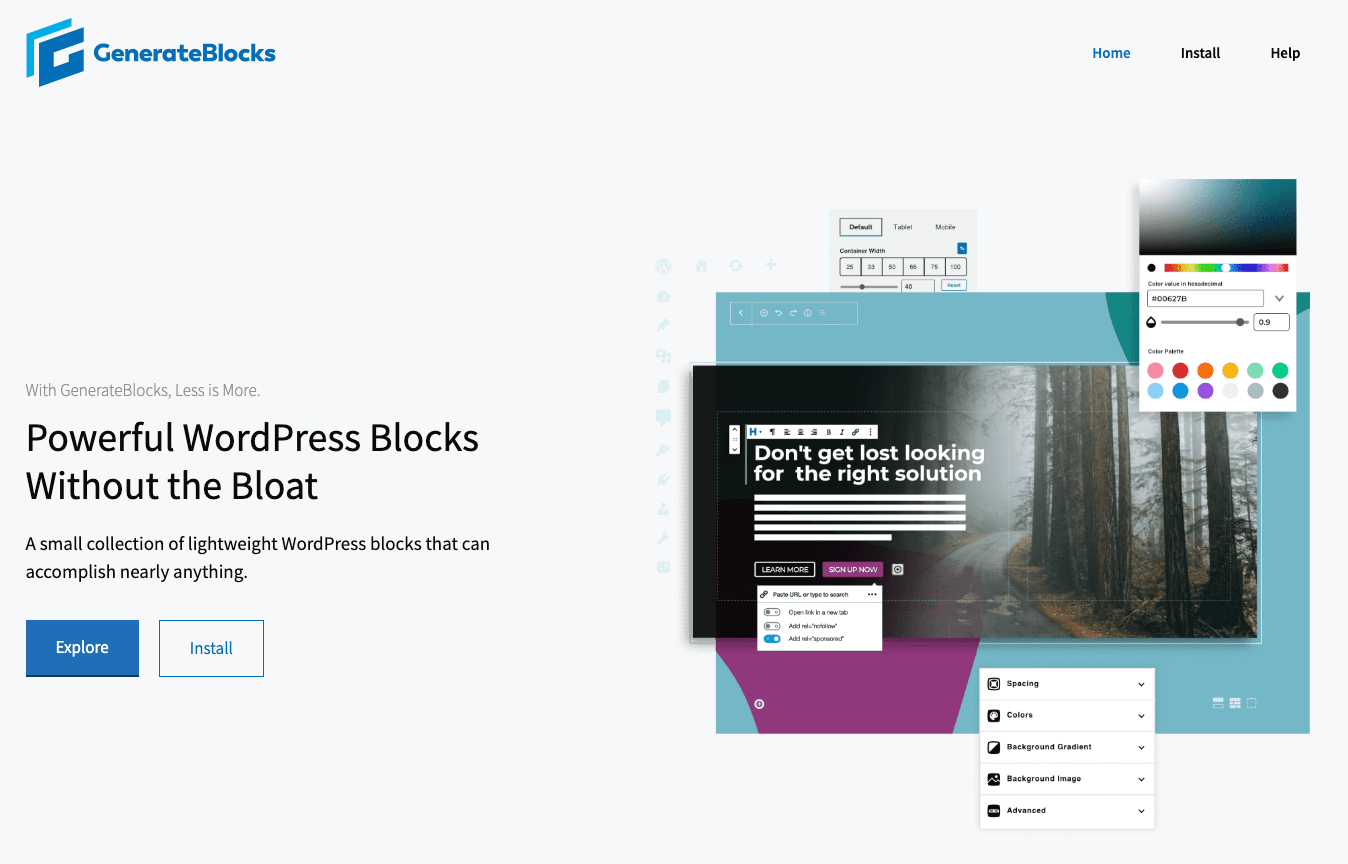